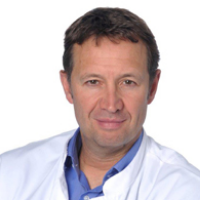 Prof. Christian Hagl studied medicine and defended his doctoral thesis at the Heidelberg University. His clinical training began in 1995 in the Department of Cardiac Surgery at the University Hospital Kiel. One year later, he began his work at the Hannover Medical School, where he underwent professional training at one of the largest Transplant Centers in Europe. After a two-year research internship at the School of Medicine at Mount Sinai, New York, he returned to Germany and was habilitated at the Hannover Medical School. In 2004, Prof. Hagl was appointed as a Senior Physician, and since January 2009 as a Leading Senior Physician in the Department of Cardiothoracic and Transplant Surgery at the Hannover Medical School. In 2010 he received the title of the Extraordinary Professor.

Since 2006 till 2008, he was a Board Member of the German Society of Cardiothoracic Surgery (special focus on the structured training of young surgical staff). Prof. Hagl is a member of numerous scientific societies and commissions, as well as a scientific reviewer of the Zeitschrift für Herz-, Thorax- und Gefäßchirurgie.

October 1, 2011, Prof. Dr. med. Christian Hagl was appointed the Head of the Department of Cardiac Surgery at the University Hospital of Ludwig Maximilian University of Munich.